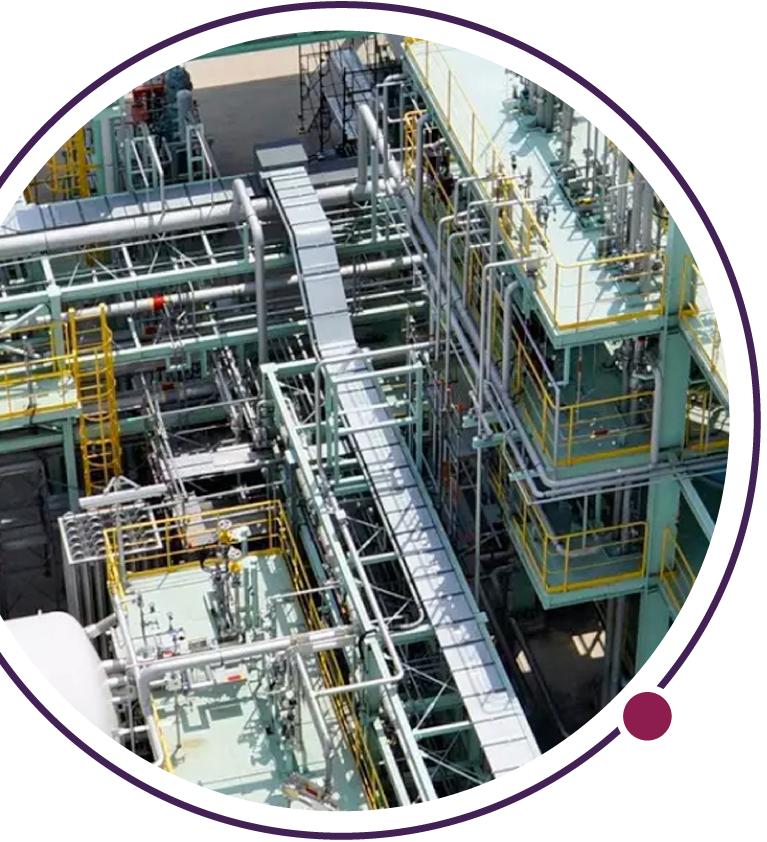 The Government has set an ambitious target to reach net zero carbon emissions by 2050. It is clear that hydrogen will play a role in this, with the Committee on Climate Change predicting we will need 250 TWh of hydrogen by 2050.

Even more ambitiously, the North West wants to achieve this by 2040, while creating the world’s first low-carbon industrial cluster by 2030.

To do this we need to find ways of decarbonising our energy system, industries and transport. Hydrogen can provide clean energy for our homes, businesses and transport networks.

Hydrogen is a chemical element that exists in molecular form as water and methane, for example. Hydrogen is produced from water by electrolysis, and from methane by reformation. It offers a way to deliver low carbon energy because when it is burned it doesn’t produce carbon dioxide, just water and energy.

A flexible energy source, it is already being used to fuel vehicle fleets and industry. Stored hydrogen is able to provide flexible power supply when the sun doesn’t shine and wind doesn’t blow.

Helping to meet climate change and clean air targets, hydrogen could be a vital part of the UK’s low carbon energy future. Decades of research, development and testing have shown that hydrogen technology is a viable alternative to fossil fuels which is competitive with other forms of low carbon energy, and could be deployed across the UK.

Role of Hydrogen in a 2050 Net Zero Energy System 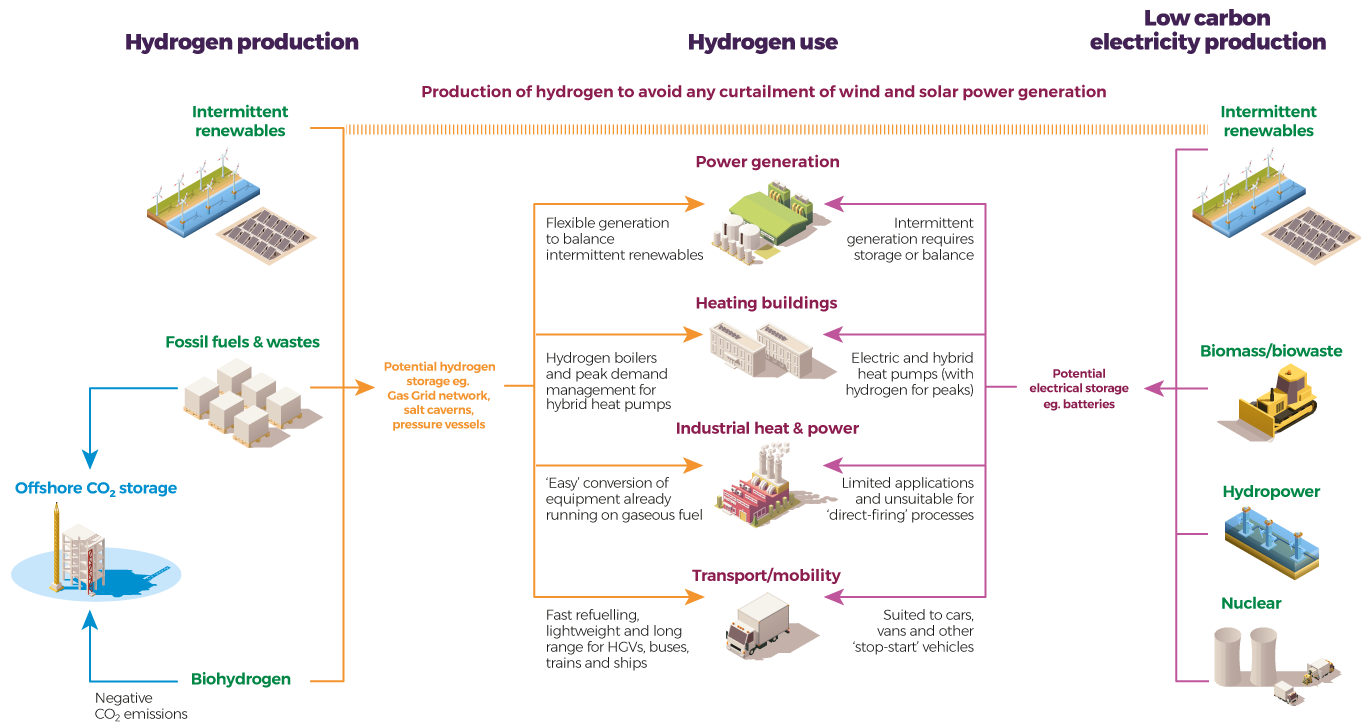 Hydrogen has an important role to play in balancing a whole energy system. It can work in two ways: to generate heat immediately, or as a storage method when renewable energy sources are generating more electricity than the country needs.

Energy from wind and solar is already being used to produce hydrogen via electrolysis of water. Equally, hydrogen produced from natural gas with carbon capture and storage – also known as blue hydrogen – can be used to generate power on demand to provide flexibility in the electricity system. Under either approach, hydrogen provides security of supply and reduces the costs of running the system.

In the future, hydrogen could be injected directly into the gas network for heat or used for transport, or stored for future use or flexible power generation. It maximises the benefits from intermittent renewable energy sources where supply does not always match demand.

This flexible provision of energy from stored hydrogen can help to balance the grid, provide improved energy security and support the growth of the renewable energy market. As electrolyser technologies improve and decline in price, the production, storage and provision of hydrogen via these processes is likely to increase. 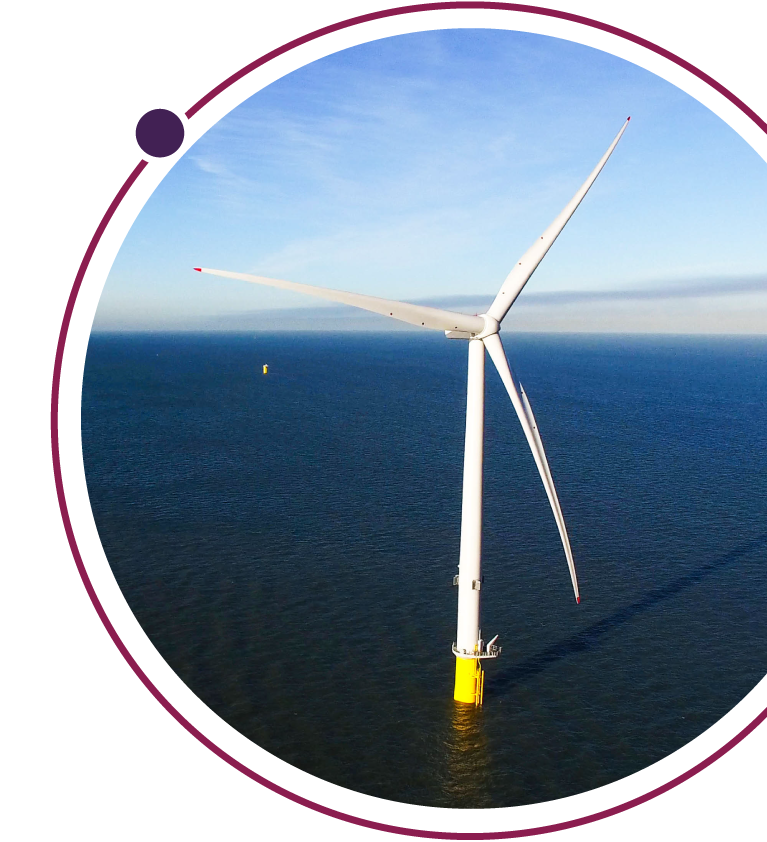 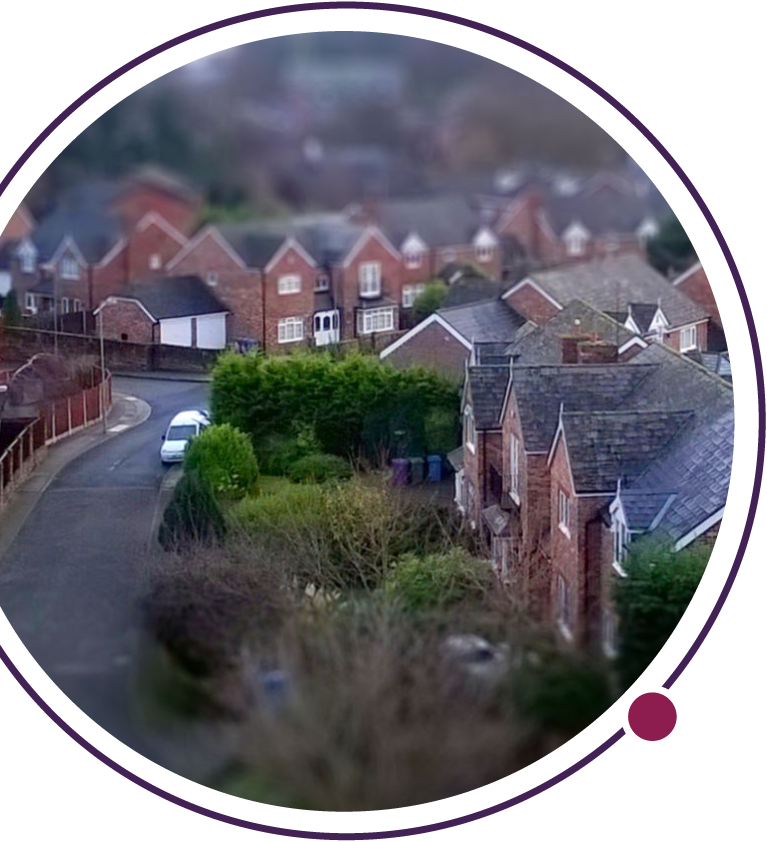 We still rely heavily on natural gas for heating our homes and businesses. The natural gas distribution networks are currently connected to more than 20 million UK homes, providing gas for heating and cooking. These networks supply the equivalent of more than twice as much energy as the electricity network. Hydrogen could be used in these existing networks instead of natural gas, resulting in significant decarbonisation of the domestic sector.

Large scale demonstrations are underway to prove that hydrogen can be used to supply heat to UK homes and businesses. This will look at blending hydrogen with natural gas, for which there will be no need for replacement of domestic appliances. It will also look at converting the gas network to 100% hydrogen.

DID YOU KNOW? Using hydrogen for heat isn’t new: prior to North Sea gas, homes were heated by town gas produced from coal, which contained around 50% hydrogen.

Industry remains largely dependent on natural gas to manufacture the products we use every day. Many existing manufacturing processes require a flame to directly heat materials, for example, in glass, brick, cement and some food manufacturing. For most sectors, switching to electricity to do this would be cost prohibitive. However, conversion to hydrogen is relatively low cost and straightforward. It, therefore, offers a viable alternative to current practice.

Hydrogen is already used as fuel in a small number of industrial sites in the North West, but its use must be proven more widely. This is already underway in large trials. 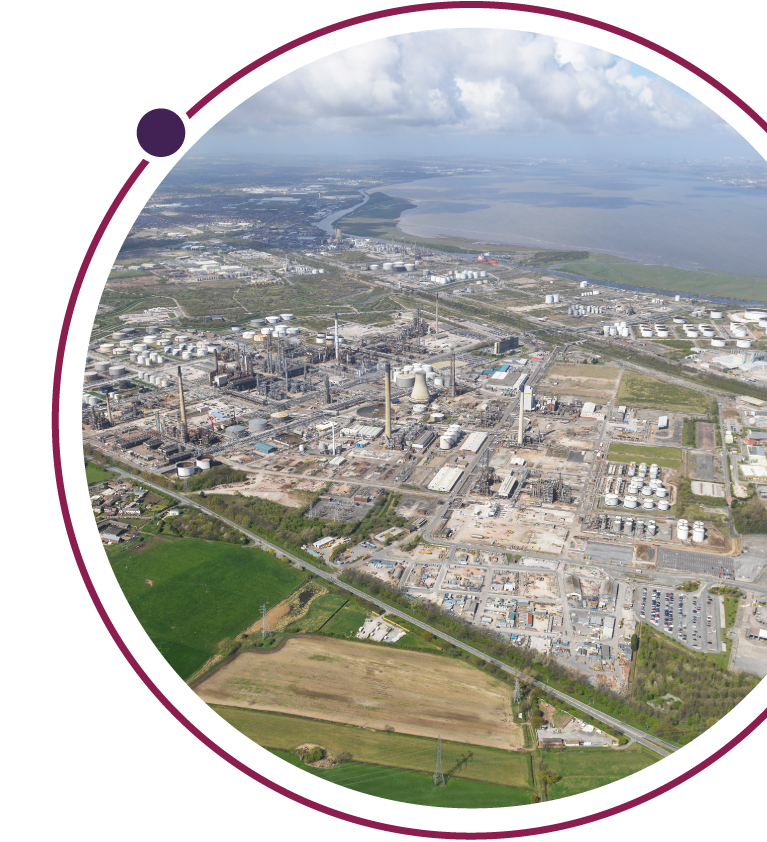 While the UK has dramatically cut its greenhouse gases from power generation, the emissions from transport have seen little change over the last 25 years. Figures from the Department for Business, Energy and Industrial Strategy showed that transport accounted for 20% of all UK greenhouse gas emissions in 2018. The transport sector also has a significant impact on air quality with many local authorities taking action to reduce the level of roadside nitrous oxides (NOx).

Research by the North West Hydrogen Alliance (NWHA) in 2019 showed that 69% of people believe it is important for every UK household to move away from fossil fuelled cars. Electric vehicles will be a huge part of the solution but while the take up of domestic electric cars is growing, the rest of the transport sector faces a bigger challenge. Hydrogen will be a key decarbonisation component of longer journey fleet vehicles, HGVs and return-to-base vehicles.

Fuel cell electric vehicles (including cars, buses and trains) combined with a network of re-fuelling stations could help address this challenge. Bus fleets in cities across the UK are now using hydrogen as a fuel and there is also a growing national network of hydrogen refuelling stations.

The use of hydrogen vehicles in place of those fuelled by petrol and diesel has the potential to significantly improve air quality on roads. Hydrogen vehicles emit only water vapour and warm air so widespread adoption would avoid emissions of harmful NOx and particulates, which can impact on human health.

Read ‘A Hydrogen Mobility Roadmap’ (May 2020) which sets out the opportunities for hydrogen in the transport sector.

Efficient and cost effective hydrogen storage is vital to maximise its role in a whole energy system. Hydrogen can be stored as a gas or as a liquid, in large amounts, and for long periods of time.

Large scale hydrogen gas storage has already been proven commercially, and storage of liquid hydrogen is an active research area. For use in the gas network, hydrogen can be blended directly or stored as pressurised gas ready for use in pipes, or at a much larger scale. Hydrogen can also be safely stored in underground salt caverns. Geologically, Cheshire is one of the few places in the UK where underground gas storage in salt caverns already exists at scale, paving the way for potential hydrogen storage. At times of lower gas demand, hydrogen can effectively be stored in bulk within the pipeline network, as currently happens with natural gas. 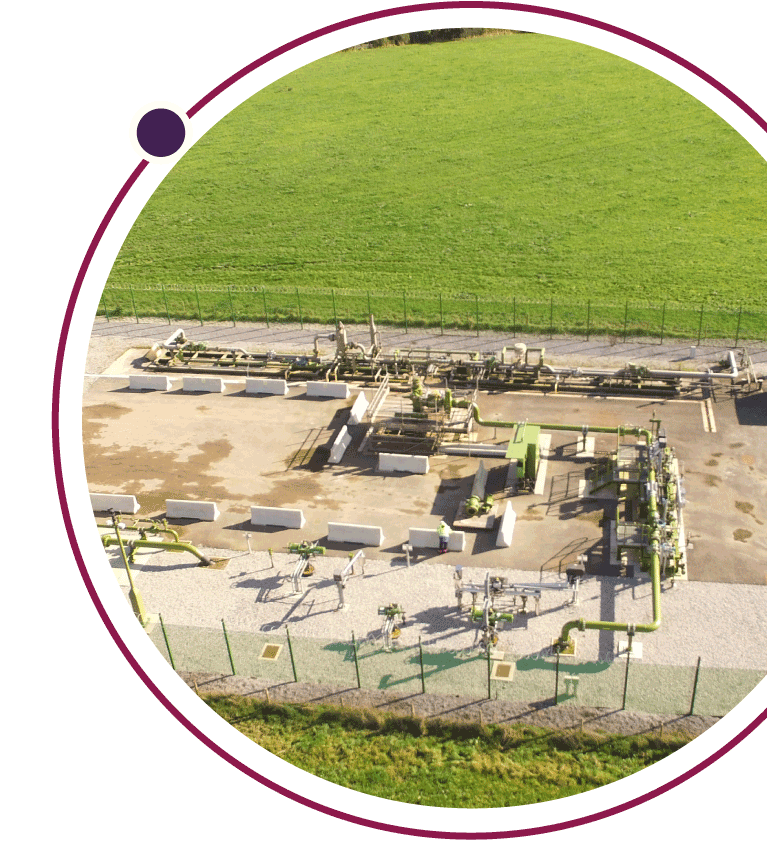 Whether you’re an academic wanting to share your research or a business keen to support the use of hydrogen in the region, we want to hear from you. Get in touch to see how you could get involved.